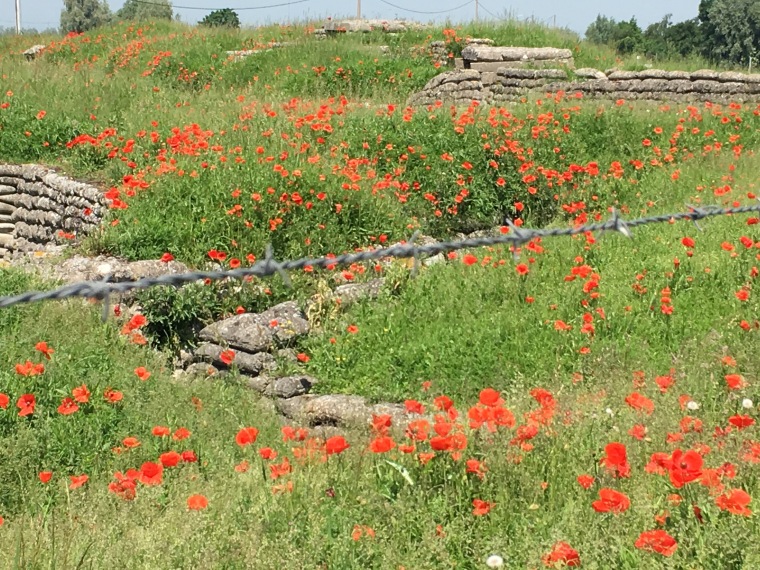 One of the most emotional and poignant experiences of our trip to Belgium this June was a guided tour of the town of Ypres, Menin Gate, the Passchendaele Museum and Flanders Fields… where poppies still grow.

I’m sharing several photos with you that I took on our trip of these WW1 battle sites – pictures that still move me to tears – and even more so – as Remembrance Day approaches.

This photo shows a much sanitized version of what the trenches looked like during the war. The bags you see are not original, having deteriorated long ago. These are made of cement. Imagine hundreds of men huddled here. The War Museum web site says this about the conditions in these trenches:

“Rats and lice tormented the troops by day and night. Oversized rats, bloated by the food and waste of stationary armies, helped spread disease and were a constant irritant. In 1918, doctors also identified lice as the cause of trench fever, which plagued the troops with headaches, fevers, and muscle pain.” 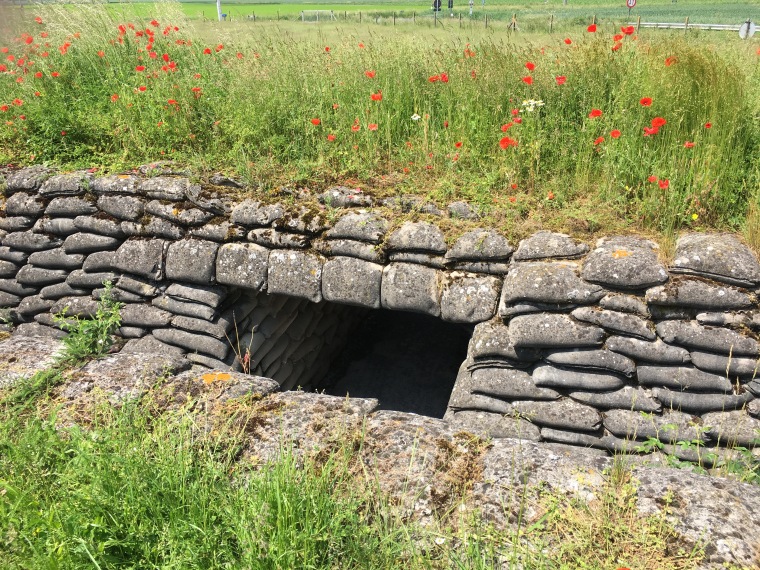 Dug outs like this one protected men and guns from bombs – but with all the conditions mentioned above.

This is photograph of the town of Ypres taken at the end of WW1. It had been completely demolished. Some towns in Belgium were built anew, using contemporary styles and materials. Others, like Ypres were rebuilt to replace what was originally there before the war.

This shows what Ypres looks like today from the same vantage point. It was rebuilt in the ancient styles of its past. There is much information available online, and of course in books, about the various battles that took place in and around Ypres, and I have to admit to not knowing a great deal about their specific history so, rather than make a mistake I invite you to do some of your own research. 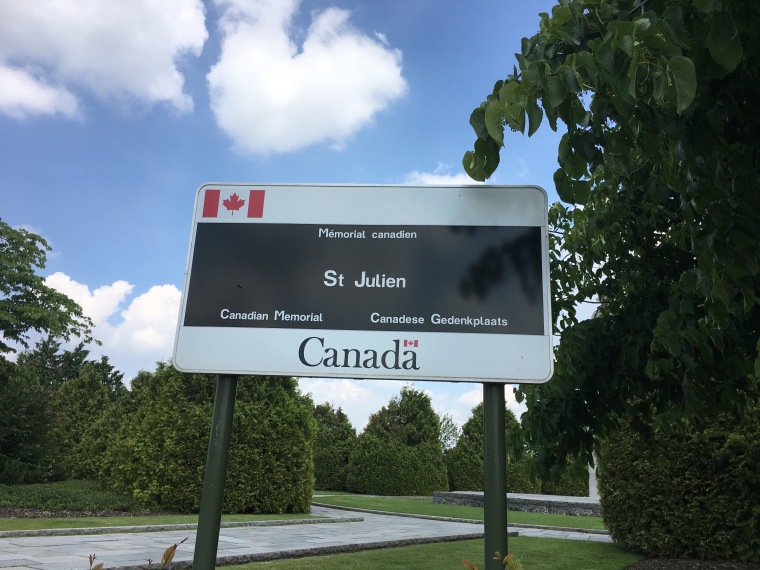 “Visible for several miles from its site beside the main road from Ypres to Bruges, the impressive Canadian Memorial at St. Julien stands like a sentinel over those who died during the heroic stand of Canadians during the first gas attacks of the First World War.” 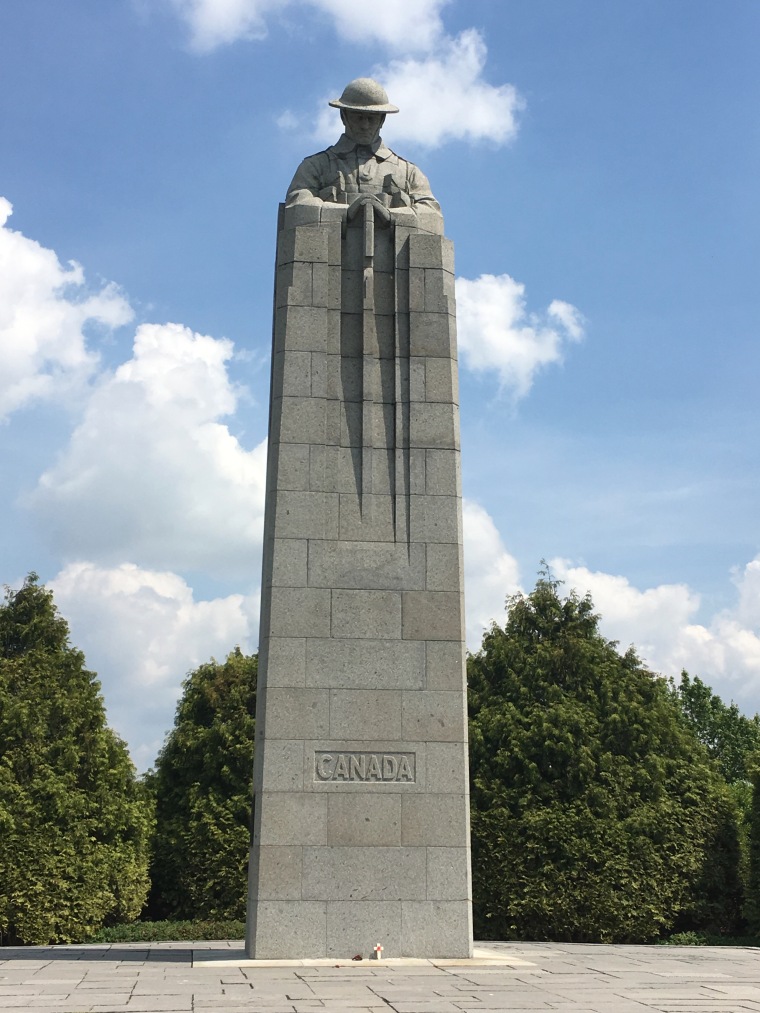 This memorial was by far, for me, the most moving of all. It towers over the countryside and the grave sites. It is called “The Brooding Soldier.”

“The sculpted figure at the top of this tower of granite is the head and shoulders of a Canadian soldier in his steel helmet. His head is bowed and his hands are resting on the butt of his rifle in the position of “reversed arms”, that is, with the rifle barrel pointing down. The ceremonial custom of reversing the order of things occurs at military funerals and is believed to have been done for the first time at the funeral of the Duke of Marlborough in 1722.”

This cemetery, the Tyne Cot Cemetery, is the largest Commonwealth War Graves cemetery in the world. It is also the most important reminder of the Battle of Passchendaele from 1917, the third battle of Ypres. Canadian graves are sprinkled throughout, proudly showing the maple leaf on their headstones. 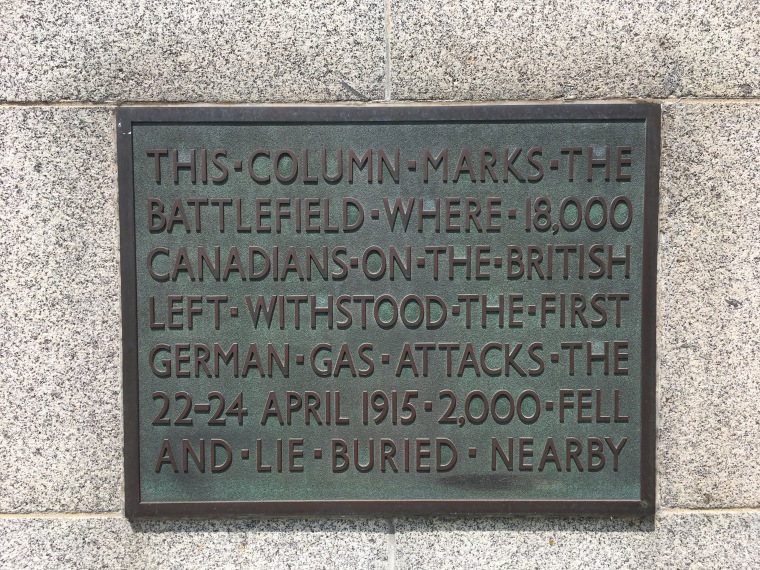 This is the plaque at the base of the statue.

A Canadian son died for his country.

This young man lied, as many did, about his age in order to do his part in defending the Commonwealth. He has the distinction of being the youngest soldier to be buried in this cemetery. 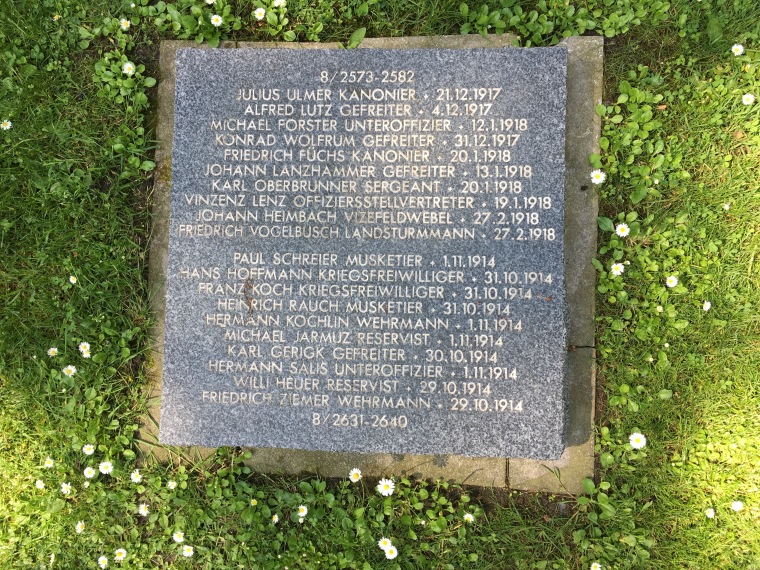 Lest we forget, young German men were killed too. Far too many were barely 18 years of age. The Nazis filled their heads with the idea of glory in dying for the Motherland. Vladslo Cemetery is one of only four First World War German cemeteries in the Flanders region. In the whole of Belgium there are 13 First and Second World War German military cemeteries. 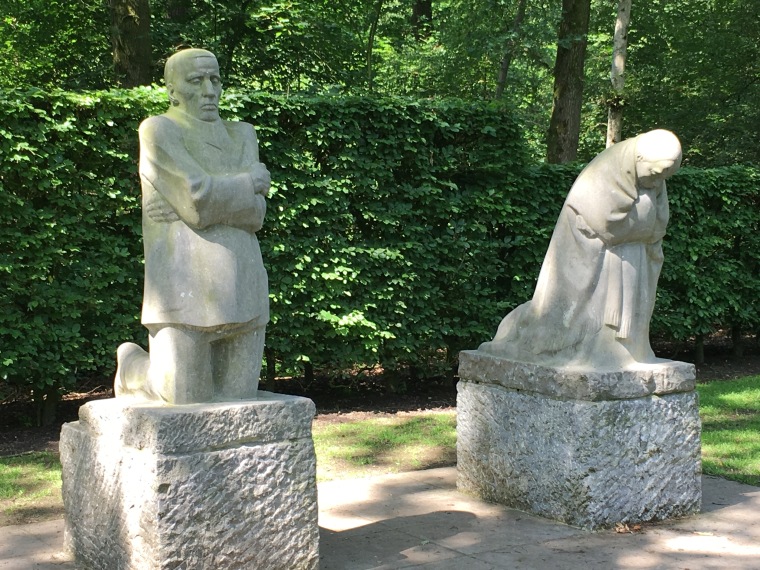 “The Vladslo Cemetery also contains a pair of statues – The Grieving Parents – by Kathe Kollwitz, a noted German sculptress. She made the statues in the 1930s as a tribute to her youngest son, Peter, who was killed in October 1914 and is buried in the cemetery. The eyes on the father-figure gaze on the stone directly in front of him, on which Kollwitz’s son’s name is written.”

The statues were originally somewhere else and were set further apart but later were placed in this cemetery as shown. This distance between the statues signifies the parents’ separation in grief, rather than their support of each other.

And finally we visited the “hospital” (dugouts into the ground with ceilings less than 6 feet, without light) where Canadian doctor John McCrae tended to the many wounded soldiers. It was here that he wrote that famous poem, “In Flanders Field.”

When the world is in chaos, and the news is filled with stories of our inhumanity to others, it’s especially important to understand the need for compromise and peace. Nothing is made clearer than when you visit these war memorials.

I hope you enjoyed this lengthy blog and visit the sites yourself someday.

← What A Great Year!!
A Friendly Reminder of our AGM →

8 comments for “In Flanders Field, the Poppies Grow…”