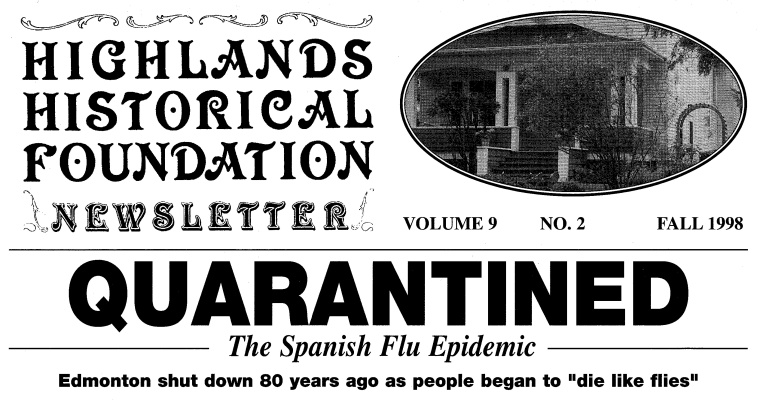 The longer we are ‘holed up’, if we listen, the more we hear echos from the Spanish flu. This article was written by Dave Cooper and Anita Jenkins to commemorate the 80th anniversary of the Spanish Flu arriving in Edmonton…

It swept into Alberta, Edmonton and the Highlands as it had spread around the world, a vicious virus which left people so weakened that they contracted pneumonia. In the days before antibiotics and intensive therapy in hospitals, many died.

It was brought to Canada by returning troops just at the end of First World War, and made its way into even the remotest of communities. The flu killed about 21 million people – about 50,000 in Canada. The particular strain showed a perverse tendency to infect the young and the hearty.

Areas of Quebec and Labrador were extremely hard hit, with some villages and native communities nearly wiped out by the disease. 85% of the people of the Beaver Indian reserve in the Peace region died.

As the flu spread, medical facilities and staff were soon overtaxed, and volunteers organized infirmaries in schools and hotels.

George Davis was a young teacher living west of Leduc in 1918 when his father telephoned with news of the epidemic. In the Edmonton Journal’s account on the 75th anniversary of the epidemic, he recounted his conversation with his father Arthur.

“Pack up your things and come home and do it right away. There’s an awful epidemic here and people are dying like flies,” said Arthur, the last mayor Strathcona before amalgamation with Edmonton.

George Davies sent the children home and closed the school. The school trustee he boarded with hitched up a team and wagon and drove him into Leduc where he could get a train into Edmonton.

“Things were really in bad shape. People I knew were sick. Some of them had actually died by that time and everybody knew this was the worst thing that had ever happened to us in Edmonton”

The trustee who drove him became ill and was dead within 4 days.

“That’s about how long it took to kill you. You got it and then got pneumonia and that was the end of you. You either pulled through or you died within 3 days,” he told the Journal.

In the Highlands, one family was hit particularly hard, says resident Helen Carswell Newnham. Eileen Topping, 12, her brother Frank and her mother all died. The funerals were held on 3 successive Saturdays. Brothers Ernie and Victor were called back from the war front because of the tragedy.

Louise Ward Palmer, who grew up in a house at 1125 – 60th Street and now lives in Florida, wrote of the epidemic in her memoirs.

“The flu epidemic arrived in the autumn of 1918, and was devastating. Many families had at least one member sick and some, as we did, all. Hospitals were full and the sick had to be cared for at home. Doctors and nurses made house calls and were so busy I don’t know how they managed.

“I remember Dr. Conn coming to the hose. In some way he secured a nurse for us as all were sick in bed at the same time.

“Eleanor developed spinal meningitis and died November 14 at the age of two years and eleven months. All were very sick in bed so the service was held in the reception hall downstairs. We lay in bed and heard the voices of those participating in the service, but I did not realize what it was all about. This must have been a very difficult time for Mother and Dad.

“Murray, born March 28, 1917, was very sick. A nurse in a starched white uniform made innumerable trips to the bathroom, giving him cool baths to try bring down his fever. She must have succeeded, for Dad always said she saved Murray’s life.”

In October and November, nursing and medical assistance was in extremely short supply.

A volunteer at the temporary Pembina Hall hospital was quoted in The Journal as saying that unless more help arrived, “It will soon be a question of not saving the patients but saving the nurses. Surely, even at the worst part of this wretched war, nurses were never more sorely needed…The nurses who are working now are doing 12 hours at a stretch and at this pressure the human system will fail under the strain.”

Edmonton was not a happy place that fall with all schools, theatres and sports places closed, and people banned from attending meetings.

Women laboured in nursing centres making what were called pneumonia jackets. It was believed people got pneumonia because they were exposed to drafts, so they were given the jackets – thick layers of cotton padding sandwiched in cloth and tied around the neck and back. 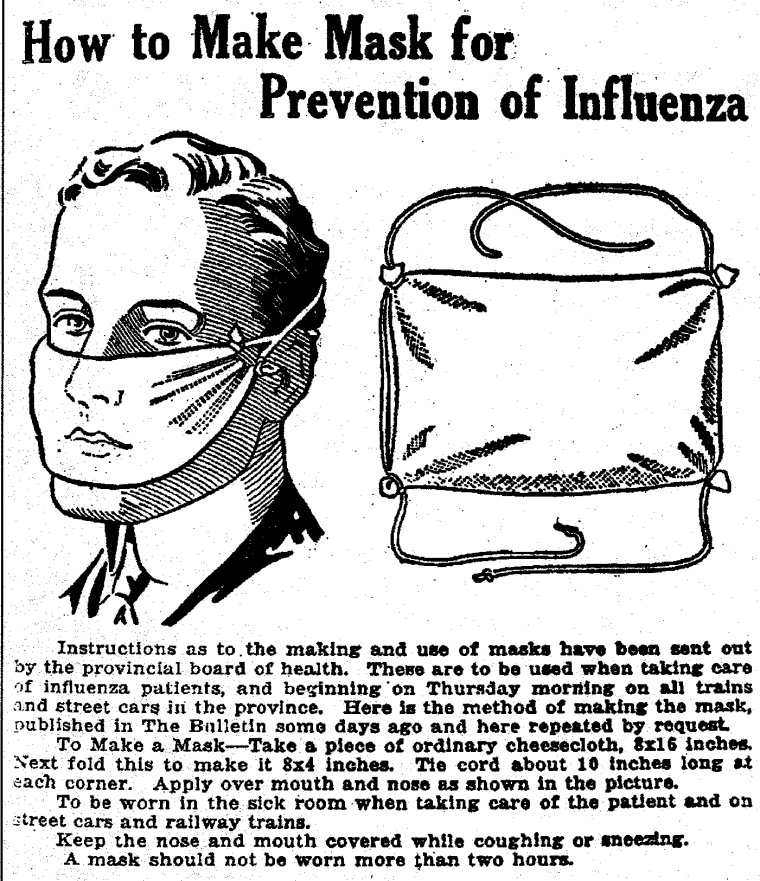 Said George Davies: “Basically, if you went downtown you had to have a mask on…It was your duty to keep the masks sterilized by putting them in boiling water. You had to have several masks so you’d never be short.”

The federal government was so concerned that it even sought to have the First World War victory celebrations moved from November 11 to Dec 1. But that request was defied.